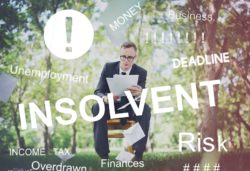 Let’s take a look at these two definitions. Cash-flow insolvency is also referred to as actual insolvency, which is the state wherein you’re having difficulty in paying off your debts. This may include when you’re in a struggle to dispose of your assets. This is usually related to liquidity.

On the other hand, balance sheet insolvency also refers to technical insolvency. This is when your assets are less to cover for your liabilities. So even if you decide to sell your assets, it would still be inadequate to compensate for This means that even when you sell all your assets, including your real estate, it cannot cover the payments needed to service your debt.

Many laws in Canada incorporate or cover insolvency. The primary ones are listed below:

The Bankruptcy and Insolvency Act or BIA

This sets laws covering filing for insolvency as well as bankruptcy in Canada. It includes consumer proposals, receivership, bankruptcies, and commercial proposals. It also manages the Superintendent of Bankruptcy office, which is a federal agency that has to ensure that bankruptcies are done fairly and orderly.

This is a law that allows insolvent corporations or businesses to restructure or reform certain debts from their creditors, which is beyond five million dollars.

This act is designed in particular for both creditors and insolvent farmers. This act abolishes the Farm Debt Review Act.

The Winding-Up and Restructuring Act

This was initially legislated in 1985. This ordinance allows specific corporations to wind up. It also allows the restructuring of commercial institutions or businesses.

Financial Difficulties Prior To Insolvency

The Constitution Act of 1867 governs the interpretation of financial crises that transpire before the incipience of insolvency. This is related to:

The formulation of security interests that implies distinguished warnings or signs.

An absconding debtor ca be anyone who leaves Ontario with the purpose of deceiving a creditor or someone that has the assets, which is not exempt by law, meaning it can be seized or claimed by the creditors.

Bulk Sales (Applies Only to Ontario)

A bulk sale occurs when a company markets all or a big part of its inventory to any of the third-party, which is not termed to be a part of its business trajectory, which implies an intention to shun paying creditors for what is owed.

A fraudulent conveyance refers to the likelihood to avoid servicing debt to a person or a company. This can be due to creditors’ relief, claiming of assets or possible seizures, preferences, and assignments that are designed to be the agreement that one should obey.

When facing financial struggle, there are legal matters that you can explore to resolve your problems. Some of which are as follows:

Consumer insolvency is a situation wherein you’re incapable to make debt payments as they come on due. Having yourself dwell in this financial crisis, there are many options that you can explore such as filing for bankruptcy or qualifying for a consumer proposal.

In terms of commercial insolvency, some alternatives and schemes are different from those designed in consumer insolvency procedures. It is administered and directed through these statutes:

A favorable approach to bankruptcy is in the form of debt restructuring. It involves designing a proposal to your creditors to settle your debts, which includes arrangements on terms. This usually includes paying your debt at a lesser amount of what you originally owe and/or extending the duration or terms.

If you’re someone who is in strife to comply with your obligations, many debt relief programs are accessible for Canadians. In fact, creditors recognize that filing for bankruptcy may result in getting pennies for each dollar you owe to them. This is the primary reason why creditors are likely to favor other debt-relief approaches such as debt restructuring. Once you restructure your debts, your creditors are likely to agree to modify the amount and timeline.

Moreover, once accepted for a consumer proposal, you are hereby obliged to make debt payments regularly or via a lump sum amount to settle your debts. If you take this as a serious move with the aid of an insolvency trustee, you can eliminate your debts and start restoring your finances the sooner you can.

Though most people are hesitant towards the idea of filing bankruptcy or a consumer proposal due to its drastic impact on your credit rating, what matters is reestablishing your finances and reconstructing your debt.

Once you have finally resolved your debts via a consumer proposal or filing for bankruptcy, it will be easier for you to consider steps to reestablish your credit. Once you have repaired your credit, you now have the urge to avoid getting into the same trap once and for all. Besides, consumer debt advice is always available for Canadians. If you’re in need of debt-help, you can find out to SEE IF YOU QUALIFY!