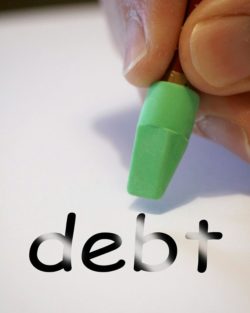 Debt is referred to as something that you owe, which is typically money. It is the amount owed by one party that is said to be the borrower to the second party as the creditor and lender. Debt can be negotiated payments or a range of payments that are owed over time, making it distinct from an instant purchase.

The term “debt” was initially used in the 13th century. It was derived from the word “dette” which comes from dete, an Old French, from debitum that is a Latin word meaning “thing owed”.

Interest is the charge given by the debtor to the lender. It is determined as a portion of the outstanding debt principal with its percentage referred to as interest rates, which are commonly paid regularly at periods given, may it be monthly or semi-annually.

Repayment may be structured into three main components: the intact debt principal amount may be payable at the time of loan maturity of the loan, amortization of the total principal balance over the loan terms, or partially amortized the loan throughout its term and having the outstanding principal owed at maturity.

Every type of debtors may default on their debt at any time, which bears consequences that may depend on the agreement and the law ruling default in the applicable jurisdiction. If your debt was protected by particular collateral such as any assets, your creditor may have the right to claim the collateral. In more severe cases, you may be compelled to file for bankruptcy.

Secured debt can be any debt that is supported by an asset as collateral. It is perceived to carry a reasonably inexpensive interest rate that is based on the assessment of your creditworthiness and the cost of your collateral.

Unsecured debt is a debt in the absence of any collateral. It is bounded by a legal agreement to which creditor or lender can when you default on your loan.

Revolving debt is an arrangement between you and the lender that allows you to obtain a maximum amount with a set limit regularly. Examples of this are credit cards and lines of credit.

Mortgages are presumably the most popular and the biggest debt which several consumers bear. These are loans offered for home purchases with the specified real estate as the loan collateral.

The usual types of debts that are owed by an individual are mortgage loans, credit card debt, car loans, and income taxes. For most individuals, debt is foreseen as an income and an immediate purchasing power before it is even earned.

A certain firm or company may secure a debt of any kind to execute or implement the finance of its projects or operations being a part of their corporate strategy.

A government may emerge in debt to compensate expenses or capital for certain projects. The funds may be dispensed by a sovereign state or by the local governments, which are referred to as municipalities.

How To Knock Down Your Debt?

Sometimes, we often dwell on the negative side instead of seeking what lies ahead. Bear in mind that rains may pour in torrents, but it doesn’t mean forever. For you to see a glimpse of lightness, you need to discover options that can help you. To get the help that you need to be debt-free, simply fill out the debt relief form on this page.