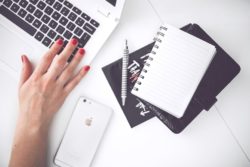 Apple, as the leading technology giant, initiated an easier way to make purchases. Apple recently announced the coming of Apple Card, which is a digital credit card that can be utilized to credit payments where Apple Pay is accepted. The Card lies into your Apple Wallet and is said to be in partnership with the Goldman Sachs and MasterCard.

Furthermore, during the announcement, Tim Cook, as the CEO of Apple stated that Apple Card is: “the most significant change in the credit card experience in 50 years” This is supported by the slogan during the media announcement: “Built on Simplicity, Transparency and Privacy, and Designed to Help Customers Lead a Healthier Financial Life.”

On the other hand, Apple Pay, as a digital wallet has been established for several years; Besides, those who have an iPhone can use the app by syncing their credit card to the tool and use it as the mode of payment anywhere it’s accepted. This news is great as it allows a seamless shopping experience; however, for those who can’t control their spending, Apple Card might be a tool that will jeopardize financial condition. If it falls into the wrong hands, it might endanger once finances and the likelihood to spend more than what can afford.

You can immediately use your Apple Card for digital purchases once you signed up. The availability is subject to approval the same as your qualification when applying for any credit card. As soon as you signed up and gets approved, apart from your digital purchases, a physical card will be delivered to you by Apple. Your Apple Card is used similarly to your traditional credit card.

According to Apple, signing up for the card is easy and once approved you can start using it. As its edge among other cards, Apple Card carries no fees and offers much lower interest charges than others. In fact, Apple offers customer loyalty rewards for users who pay through it.

As per the statement of Apple: “Every time customers use Apple Card with Apple Pay, they will receive two percent Daily Cash. Customers will also get three percent Daily Cash on all purchases made directly with Apple, including at Apple Stores, on the App Store and for Apple services.” The Daily Cash that you get will be charge-back on the card and can be utilized immediately.

Digital Wallets as Bait to Overspend

Advancing to cashless is an exceptional way to monitor and track your purchases. It is a way for you to reassess your finances and check on where you can cut back. However, for those who have bad habits of spending, it can create a sense of detachment for the fact that you might be spending beyond what you can afford. Moreover, survey shows that individuals who use credit cards rather than cash tend to overspend. Some consumers might be reluctant in getting out their cash from their wallet but with digital wallets, there is an implication of lesser pain in spending.

Canada being a Cashless Society

Canada is termed as one of the world’s leading cashless society as per the Bank of Canada. Some of which are Sweden and the UK. Besides, the University of Illinois Urbana Champaign conducted a mobile payments study in China that shows that consumer spends 23% more in using their mobile payments. China is said to be one of the largest mobile payments users; with Canada, as the use of mobile payments continues to rise, the tendency to spend more is likely to occur.